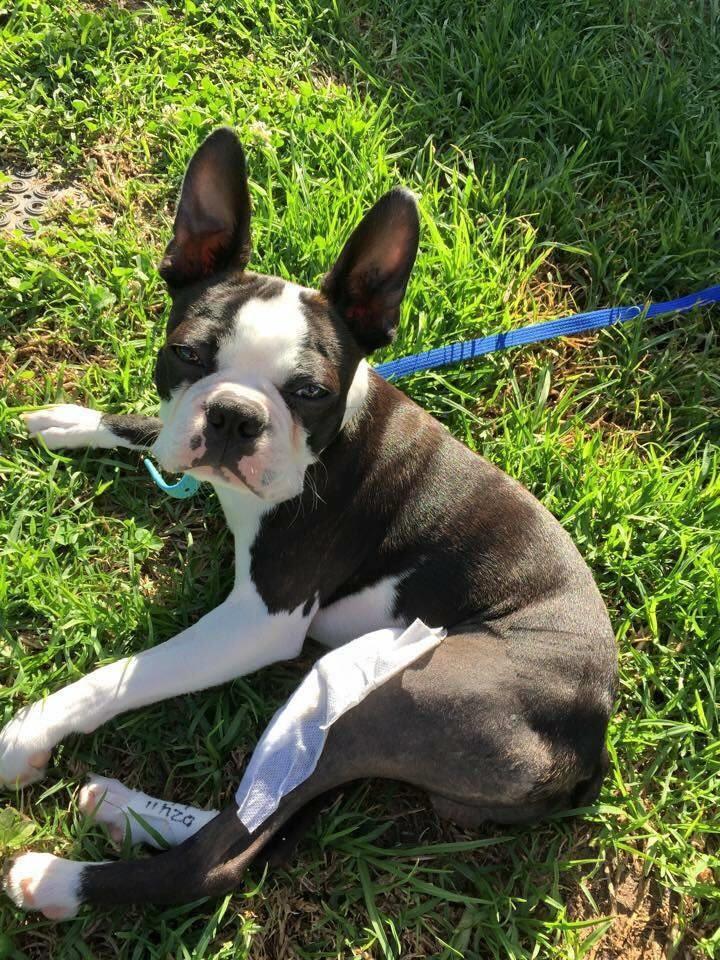 Douglas is a very expensive purebred Boston Terrier puppy. Douglas soon got the middle name 'trouble', due to his Rambunctious antics and confident character.

One day Douglas and my mum’s dog, Bug (Mastiff X) were playing with a new tug rope. Douglas jumped up to grab the rope but slipped. Falling onto the floor, Douglas landed awkwardly on his left hind leg. He initially let out a yelp but then continued playing from a laying down position. It was after a few minutes of observation I noticed he was struggling to stand up and was not bearing weight on that leg at all. Mum and I agreed it was most probably a strain or sprain and if he was not better in the morning we would take him to the emergency veterinary hospital.

Sure enough in the morning he was no better, in fact the leg was visibly swollen around the knee area and he was still not bearing weight on it. We booked Douglas in for the first available appointment. The vet thought it might just be soft tissue damage and prescribed some anti-inflammatory medication to help with his pain and bring down the swelling. They also told me to make an appointment to see my usual vet on the next day for a follow up.

The next day, I did just that and my vet was worried it was broken and admitted Douglas for X-Rays under sedation. The diagnosis wasn't good, Douglas had shattered his tibial crest. This is was a complicated fracture. After reviewing the X-Rays it was decided it would be best to put Douglas's leg in a full cast/splint for 6 weeks, confine him to a crate during this healing period and complete regular X-Rays to ensure all bone fragments were in alignment.

After the 6 weeks of regular X-Rays and bandage changes, our local vet was happy to take the cast of leave Douglas’ leg. Within a few days I knew his leg still wasn't right, he wasn't putting any weight through it, he was uncomfortable and in pain. After another set of X-Rays, they showed the bone was still fragmented and he required major surgery as it wasn't going to heal. This surgery cost just over $3,500, on top of all the other bills for bandage changes and X-Rays.

Once again poor Douglas was confined to a crate. Three days after, he was almost walking normally, the plates, pins and wire had worked! Follow up X-rays were promising and we were very happy with the way Douglas was healing. He was going swimming in a pet rehab pool and was gaining muscle tone slowly in that leg. Then one morning Douglas woke up and was lame again in that leg. My heart sunk, as I booked him into have more X-Rays. Douglas had a subluxating patella, caused by the fragmentation loosening the tendons that hold the knee cap in place.

He required another major operation to correct this. After seeing the X-rays, the vet decided he would only need to anchor the patella back in place. Whilst Douglas was on the operating table they had to deepen his trochlea groove as the anatomy of his knee has changed and he was optimistic Douglas would avoid further surgery. This surgery cost approximately $2,000.

Douglas was once again refined to a crate. Nothing I did seemed to get him to put any weight through that leg. Douglas got a wound infection and was in large amounts of pain. After being prescribed passive movement exercises for the leg, he slowly started to put small amounts of weight through that leg. Douglas was eventually given the all clear to start swimming rehab every two days and within two weeks he was running almost like normal.

Petplan have covered Douglas for over $15,000* worth of vet bills. Without Petplan I would not have been able to afford such wonderful care and the best available treatment possible.

Thanks to Petplan, Douglas has all four legs in working order!