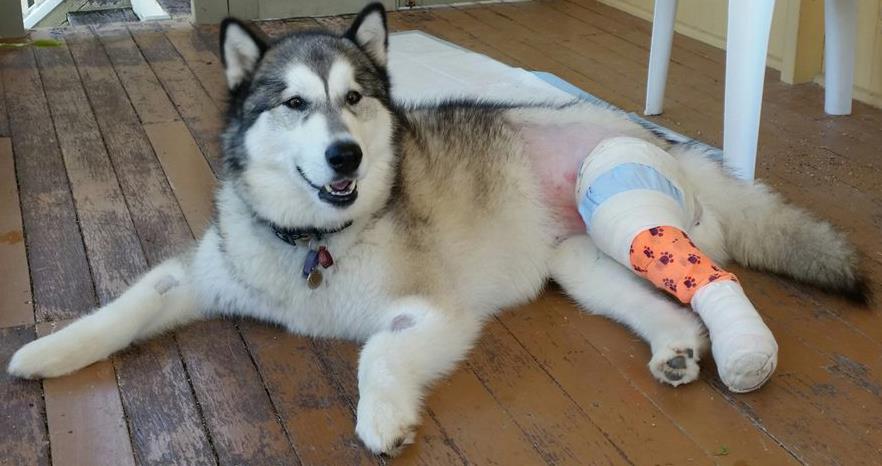 I have had Skylar since she was 12 weeks old. She ruptured her cranial cruciate ligament in her left hind leg while playing in the backyard. Being a large, active dog, the vet recommended that Skylar have a TTA surgery performed by a specialist surgeon to repair the leg. Fortunately I have had pet insurance for Skylar with Petplan since she was a puppy, and it was a relief to know that the costs of getting her better would be covered.

In the end I was only out of pocket the $150 excess, and Petplan paid for her surgery, X-rays before and after the procedure, consults, medications, and also for physiotherapy during Skylar's recovery, totaling in over $5000 in claims.

Skylar recovered very well after having surgery on her left leg, but then 11 months later she ruptured the cruciate ligament in her right leg. Skylar is currently recovering from her second major orthopedic surgery in less than 12 months, and again Petplan has covered all of the associated expenses over the $150 excess. By the time she recovers fully the claims will be similar to last time, so within a 12 month period Petplan will have covered over $10,000 in vet care for my girl.

Knowing that I would not have to worry financially about being bale to provide Skylar with the care that she has needed has been wonderful. Not having that stress has meant that I have been able to focus on getting her through the rehabilitation period, and on the struggle of keeping a very active dog quiet for the first 8 weeks post surgery in order to properly heal!

Without pet insurance I would have had to borrow money to cover the cost of Skylar's surgeries. Not having the repairs done was not an option in a dog of her size. It would have been stressful to have to cover the over $5,000 in expenses for one cruciate repair at short notice, let alone another $5,000 for the second surgery less than 12 months later. I am very grateful that I had her insured with Petplan, so I could provide her with the veterinary care that she needed.

Skylar is recovering well from the second surgery. She still has many weeks of recuperation ahead, but so far she is progressing well, and is on track towards getting back to normal. Insurance is something that you get, but hope that you won't actually need to use. However if you do need to claim, it provides great peace of mind financially during a stressful time. Thank you Petplan!